The Deeper Science Behind Our Self-Cleaning Surfaces 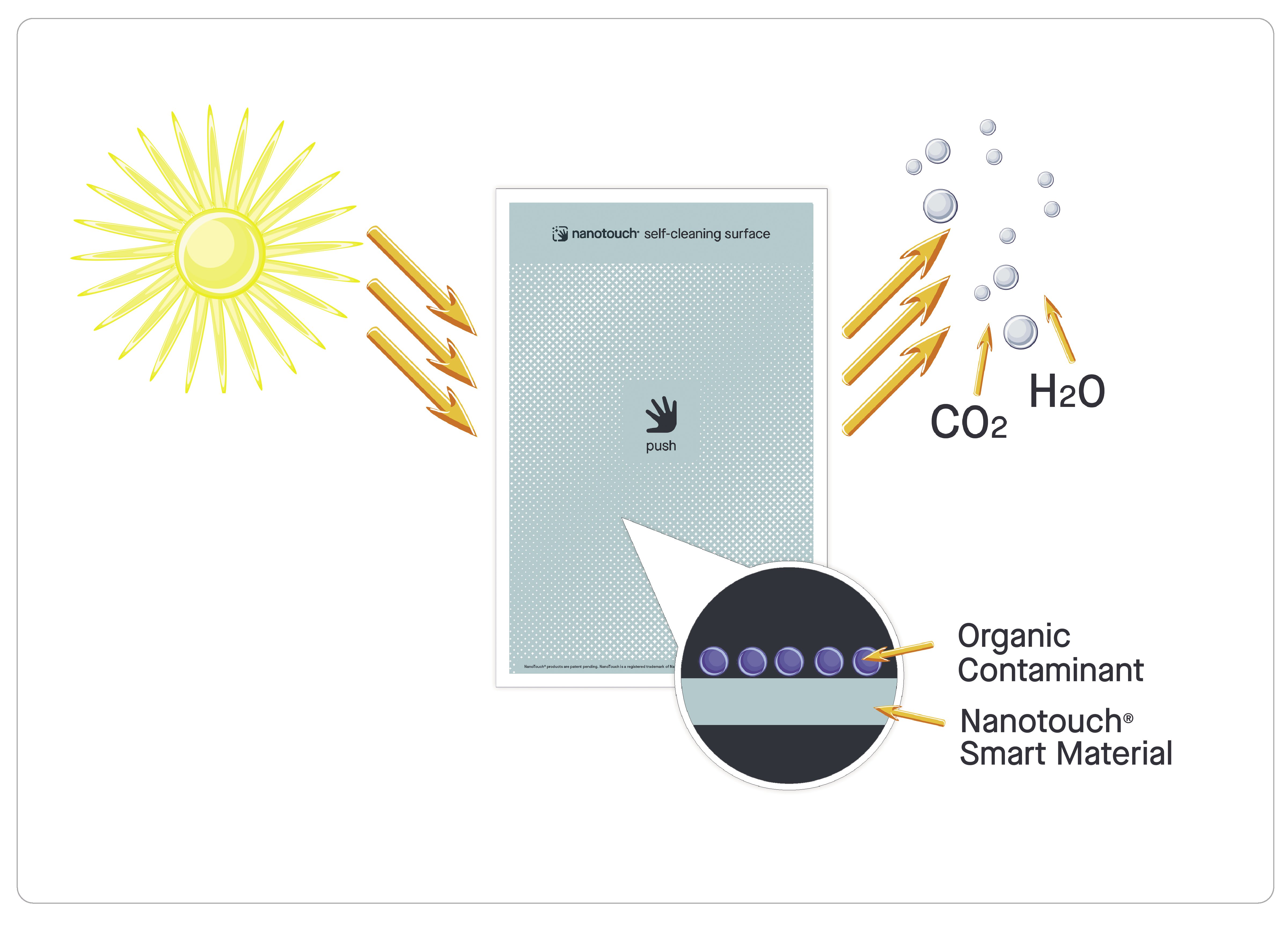 Of all the questions we get about our line of self-cleaning surfaces, the one we hear the most is “How do they work?”

The short answer is that our surfaces use nanocrystal technology to create a powerful oxidation reaction when exposed to any visible light.

The full answer is longer still and includes a lot of science. Here, we break it down.

The term “photocatalysis” is comprised of two parts – “photo” referring to the use of light and “catalysis,” referring to the use of a substance to speed up a reaction rate. Photocatalysis is defined as the acceleration of a reaction by the presence of light and a catalyst. There are various materials that show photocatalytic capabilities, but Titanium Dioxide (TiO2) –– a material we use in our products –– has been the most widely studied photocatalyst over the past 40 years, not just because it works but also because it's safe (i.e., non-toxic).

How Does a Photocatalyst Work?

Upon absorbing energy from a light source, a photocatalyst material (like our self-cleaning surfaces) generates higher-energy electrons that fuel a process that results in the breakdown of toxic organic matter into carbon dioxide and water.

When light illuminates the surface, electrons are released and bind to oxygen (O2) to form superoxide anions (O2-), which are able to degrade organic material. The photocatalyst then becomes positively charged and removes single electrons from moisture in the air, creating hydroxyl radicals (OH*). Hydroxyl radicals are short-lived molecules that can also physically decompose organic contaminants into water and carbon dioxide. Superoxide anions and hydroxyl radicals are called reactive oxygen species (ROS). These ROS further react when exposed to oxygen and humidity leading to the formation of hydroperoxyl radicals (HO2). ROS react with organic material, such as proteins and polyunsaturated fatty acids, leading to physical degradation of the contaminant. These processes are energized by any type of visible light, including incandescent, fluorescent and LED.

A key distinction that needs to be made between smart materials like Nanotouch Self-Cleaning Surfaces and other surface treatments and technologies is whether the cleaning activity is due to physical/mechanical actions or due to a substance or mixture of substances. In other words, Nanotouch works by physical means (light and electricity) rather than a chemical substance that is generally toxic. The other main difference is with a catalytic process nothing is released from the surface. The technology is creating the cleaning action without sacrificing itself or releasing embedded toxins. A similar approach is used by ozone generators. They use electricity to split oxygen molecules. Nanotouch works in a similar way but gets the charge from light rather than from an electrical outlet; it’s a green solar approach.

And speaking of green: Not only does the Nanotouch surface create the self-cleaning action through a catalytic process rather than releasing toxins, but TiO2 also has an exemption from toxicity tolerance because it is categorized as an inert ingredient. In fact, the U.S. Food and Drug Administration (FDA) also has deemed TiO2 a Generally Recognized as Safe (GRAS) ingredient.

If you’ve made it this far, we hope walking you through the science answered your most pressing questions. For many of our customers who see us as part of their cleaning protocols, we don’t get the opportunity to nerd out on what we consider to be the future of clean. If you have any questions, please feel free to send us an email or drop us a line. We’d love to talk shop with you!